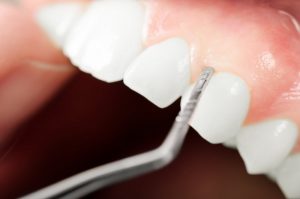 Have you ever brushed or flossed your teeth and then see blood? This can be a startling sight, but sometimes it’s nothing more than your gums adjusting to a new brushing or flossing routine. However, if your gums continue to bleed, look red, swollen, or puffy, you may have a mild form of gum disease. Over 80% of the US population is affected with some type of gum disease. Keep reading to discover whether or not you have this disease, and how your family dentist in Lisle can help with your bleeding gums.

Why Are My Gums Bleeding?

See some of the most common causes of bleeding gums below:

By far the most common cause of bleeding gums, gum disease is an infection in the gums typically caused by poor oral healthcare. Lack of brushing and flossing can cause bacteria to get inside your gum line, which causes your gums to start to pull away from your teeth. This is why bleeding gums is one of the first signs of gum disease. Other initial symptoms include: red, swollen, or tender gums.

When it comes to brushing your teeth, you want to clean away all of the plaque and bacteria, right? Well, sometimes this can cause people to over-aggressively brush. Your gums are made of delicate tissue, so when you choose your brush, pick a soft-bristled one. Additionally, use gentle, circular motions to clean your teeth. Think of it more as a massage rather than a scrub.

Flossing is important to remove plaque and food debris from in between your teeth, but it is possible to over-floss. To make sure this healthy habit isn’t causing your gums to bleed, be gentle. Rather than forcing your floss in between each tooth, you can slide it up and down, carefully following the curve of each tooth for the least amount of friction.

Canker sores or mouth ulcers can be the cause behind painful or bleeding gums. These sores have a white center with red edges, and they can form all over the mouth—including your gums. While they are not contagious, canker sores can come back overtime. Researchers don’t know exactly what causes them, but they know that bacteria play a role, which makes good oral healthcare the best way to prevent them.

If there weren’t enough reasons to quit already, smoking and the use of tobacco products can cause a number of gum issues like bleeding, painful, or sensitive gums. Tobacco use also puts you at higher risk for developing gum disease.

How Can My Dentist Help?

The best way to prevent bleeding gums is to see your Lisle dentist for regular checkups and cleanings. They will be able to make sure your oral health is in tip-top shape. And, if you have gum disease, they can provide deep cleanings to get your gums healthy again.

Now that you know some common causes of bleeding gums, you can take the necessary steps to keep your gums happy and healthy!

Dr. Frank Marchese and Dr. Jeanelle Marchese are a father-daughter team of dentists who love providing quality care to their patients. They understand that gum disease is very common, which is why they offer gum disease therapy. They currently practice at Arbor Dental Care, and they can be contacted through their website or by phone at (630) 969-2310 for any questions.

Sorry, the comment form is closed at this time.